There was once a village along a river. The people who lived there were very kind. These residents, according to parable, began noticing increasing numbers of drowning people caught in the river’s swift current. And so they went to work devising ever more elaborate technologies to resuscitate them. So preoccupied were these heroic villagers with rescue and treatment that they never thought to look upstream to see who was pushing the victims in.

This book is a walk up that river.

Sandra Steingraber begins Living Downstream with this parable. It is indeed very apt to the way in which we look at cancer. It’s all about the cure. Run For The Cure. Research will find a cure. Wouldn’t it be better not to make ourselves sick in the first place?

Steingraber is uniquely qualified to explore the question of how cancer and the toxins we release into the environment are linked. She holds a Ph.D. in biology and she is a cancer survivor. But Living Downstream is not simply a stilted recitation of facts. Steingraber also holds a master’s degree in creative writing, and Living Downstream is beautifully written, a satisfying and engrossing interweaving of her own personal fight with cancer and the results of her investigation and research into the state of our relationship with toxins.

Since World War II, there has been an explosion in the development of synthetic chemicals. Most enter use without any research at all into their toxicity or carcinogenic properties. DDT is perhaps the best known introduction. First synthesized in 1874, DDT wasn’t put to wide use until WWII, when it was used to halt a typhus epidemic in Naples, and shortly thereafter was used in the Pacific theatre. By 1945, the U.S. government allowed the release of surplus supplies of DDT for civilian use. An advertising campaign promoted DDT as the farmwife’s friend, complete with dancing farm animals. As it turned out, DDT wasn’t quite the boon it was advertised to be after all. It was banned in the U.S. in 1972. 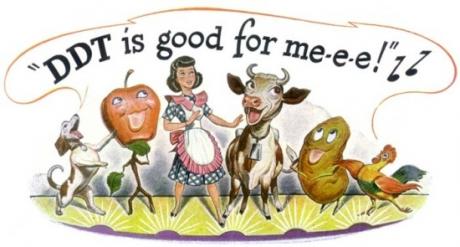 That experience didn’t discourage our embrace of synthetic chemical-based pesticides. On the contrary, in 1939, there were 32 pesticidal active ingredients registered with the U.S. federal government. At present, 1,290 are registered, and are formulated into many thousands of products. In 2001, U.S. pesticide use exceeded 1.2 billion pounds.

The postwar boom in synthetic organics was not limited to pesticides. Other products derived from petroleum found wide-spread use. World War II ushered in the transformation of a carbohydrate-based economy to a petrochemical-based economy. For example, plastic was formerly derived from plants. Invented in the 1870s, it was first called celluloid. Now, the manufacture of plastic consumes 8% of world oil production.

These synthetic chemicals end up in the air we breathe, in the earth and the food we eat, and in the water we drink. In 2007, 834,499,071 pounds of known or suspected carcinogens were released into the air, water and soil by reporting industries in the U.S. Many chemicals are not classifiable as a human carcinogen, not because they have been rigorously tested but just the opposite, because of an absence of knowledge. Our current regulatory system tends to assume chemicals are safe unless proven otherwise.

Synthetic chemicals linked to cancer are largely derived from the same two sources as those responsible for climate change: petroleum and coal. The U.S. petroleum industry accounts for one-quarter of toxic pollutants released each year in North America. That doesn’t include the air pollutants generated by vehicles . Coal-burning electric utilities and mining operations are also top generators of toxic chemical releases. Investments in green energy are also investments in cancer prevention.

Steingraber writes that it is time to declare the production of carcinogens and suspected carcinogens to be the result of outmoded technologies and invest in green chemistry.

It is time to aim for zero waste, eliminating the need to bury garbage over drinking water or light it on fire inside incinerators.

It is time to invest in diversified, local, organic farming. This would decrease amounts of carcinogenic diesel exhaust created from the long-distant transport of food, decrease pesticide residues in our diets, decrease pesticides in our drinking water, decrease dependency on petroleum-based fertilizers, and increase access to healthy foods to fight obesity.

It is time to invest in green energy sources and thus reduce the air’s load of ultrafine particles, polycyclic aromatic hydrocarbons and aromatic amines.

Steingraber concludes that what is needed is a precautionary approach. The onus should be on manufacturers to prove lack of harm, rather than on users to prove harm. Let us embrace the Wingspread Statement on the Precautionary Principle:

The release and use of toxic substances, resource exploitation, and physical alterations of the environment have had substantial unintended consequences on human health and the environment. Some of these concerns are high rates of learning deficiencies, asthma, cancer, birth defects and species extinctions; along with global climate change, stratospheric ozone depletion; and worldwide contamination with toxic substances and nuclear materials.

We believe existing environmental regulations and other decisions, particularly those based on risk assessment, have failed to adequately protect human health and the environment, as well as the larger system of which humans are but a part.

We believe there is compelling evidence that damage to humans and the worldwide environment, is of such magnitude and seriousness that new principles for conducting human activities are necessary.

While we realize that human activities may involve hazards, people must proceed more carefully than has been the case in recent history. Corporations, government entities, organizations, communities, scientists and other individuals must adopt a precautionary approach to all human endeavors.

Therefore it is necessary to implement the Precautionary Principle: Where an activity raises threats of harm to the environment or human health, precautionary measures should be taken even if some cause and effect relationships are not fully established scientifically.

In this context the proponent of an activity, rather than the public bears the burden of proof.

The process of applying the Precautionary Principle must be open, informed and democratic, and must include potentially affected parties. It must also involve an examination of the full range of alternatives, including no action.

If you or someone you love has ever been effected by cancer, if you care about the state of our environment, Living Downstream is a must-read. In 2010, The People’s Picture Company of Toronto released the film adaptation of Living Downstream. You can watch the trailer, below.